Abraham has sparkled in Khachaturian’s concerto 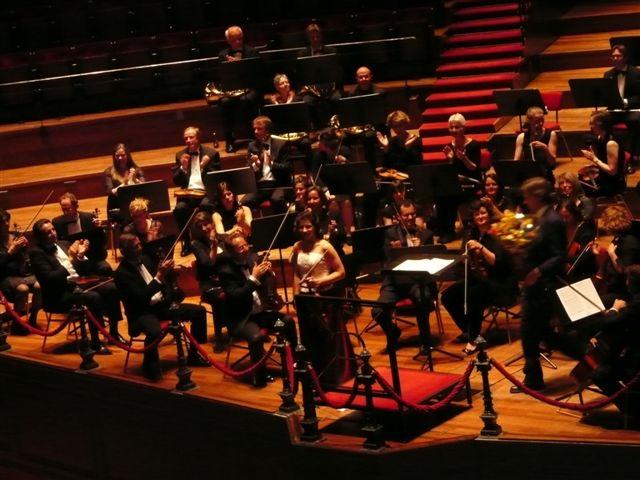 We attended the concert so that we could listen to the Hungarian soloist now living in Gent, Márta Ábrahám, whose two solo albums has been published recently.

Her talent cannot go unrecognized. A few months ago she performed the violin concerto of Dirk Brossé with the Belgian National Orchestra and the piece was also recorded at Philips Classics with the famous London Philharmonic Orchestra, conducted by the composer himself. The Flemish Symphonic Orchestra has also signed a contract with Márta Ábrahám for 6 concerts. In the next season she is going to play Bartók’s famous 2nd violin concerto and everyone who has had the opportunity to listen to her interpretation of Bartók’s 1st violin-piano sonata on her CD is now waiting for this next experience with great anticipation.

Aram Hacsaturján’s violin concerto, whose Armanian folk music roots are flavoured with Russian romanticism, is a wonder only comparable to fireworks. This violin concerto is very demanding, not only technically but also idiomatically –that is, in its capacity of understanding and exhibiting the distinct ways of self-expression typical of a region -,therefore, few is the number of violinists whose performance may attain these hights. The low number of satisfying quality recordings made of this piece is also a proof for that. Saying that the performance of Márta Ábrahám was satisfying would be an understatement. Her concert, which was recorded by Radio 3 in Antwerpen, undoubtedly overshadowed all the rivals who had made it into a recorded album – the digital ones for sure and the bakelite of David Oistrakh is too old to count.

Listening to a musician so virtuosic and so much at ease on stage was a genuine enjoyment. Her performance of the first long movement full of contrasts and ending with a brilliantly played cadenza was awarded with a ruptuous applause. The following piece, a particularly inspiring Andante Sostenuto provoked this very same reaction from the crowd. The final movement, the solemn Allegro Vivace was the cherry on top, exciting from the first note to the last.

Márta had to come back on stage three times for which she expressed her gratitude with an encore, the Caprice 17 by Paganini. All things said, this was an absolutely beautiful concert.