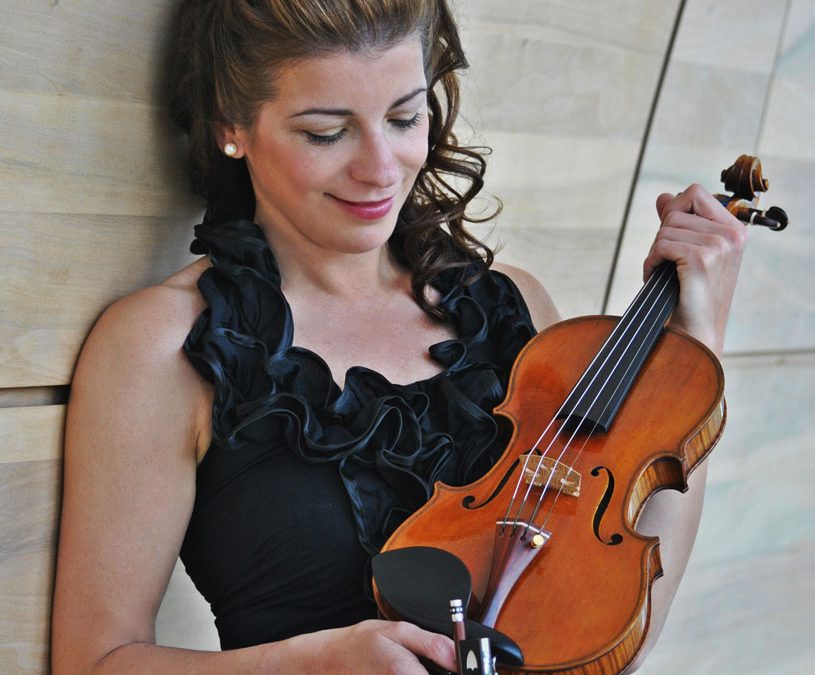 The programme series of the Dunakanyar art weeks starts with a mass in the catholic church of Zebegény. The art festival, organized for the fourth time, is going to be open until the 22 July. At 7.30 p.m., following the mass and the welcome speech of András T. Mészáros, chairman of the General Assembly of Pest Megye, the visitors of Zebergény can listen to the concert of Márta Ábrahám (violin) and Marianna Tóth (piano).

As a solo violinist of excellent CD recordings and major concerts, Márta Ábrahám is earning a reputation here and abroad alike. The violinist, a 1996 graduate of the Ferenc Liszt Academy of Music, comes from a musician’s family. Her father is a trombonist and the director of the music school in Vác, her mother is a violinist and her sister, Sára is the cellist of the Matáv Orchestra.

– I was attracted to the instrument already at a pre-school age –she says about the beginnings of her career. -I started my studies when I was six and I had the opportunity to master the best practices of outstanding teachers and artists. For example, I studied under Ruggiero Ricci for two years and I spent another two in the Guildhall School in London as a student of David Takeno. In Budapest Natasa Sós and Dénes Kovács were my professors.

-What did you learn from these world famous masters?

-All of them have their specialties. With Ricci I learnt Paganini etudes and it was his virtuoso technique that I could benefit from the most. Takeno, on the other hand, put the emphasis rather on style. How to reach the most authentic interpretation of Mozart, for instance. He taught me how to use steel strings and a modern bow and still be able to perform classic and baroque composers in an appropriate style. I think that European artists are experts of stylish interpretations. With Dénes Kovács, who is excellent both as a teacher and as a violinist, we had long discussions about Zathureczky and the Hubay school. Nowadays, naturally, no one plays the violin as one did fifty or a hundred years ago, still, I am sure that this Hungarian violin tradition, worthy of its fame, has integrated into my playing. The multi-faceted voice quality of the violin –this is the key term of the Hubay school and an idea that Dénes Kovács too very often referred to. I also studied with Nathan Milstein, Szpivakov and Lóránt Fenyves for a short period of time.

-It seems that you are much more sought after abroad than here in Hungary –even though you used to win a national violin competition every single year.

-I won the Hubay, the Zathureczky and the Károly Flesch competition during my academic studies and I also had the honour of having the violin of Zathureczky Ede for four years. The professionals know my name very well, maybe the concert organizers not so much. Nowadays it is difficult even for the very good violinists to break into the business. There are serious battles for concerts. But the situation is quite similar in Western countries. This profession does not settle for knowledge any more, on has to do some serious self-management to succeed. Whatever I achieved so far was exclusively the result of my own work. And I indeed have some nice results: I participated in four album recordings in a rather short period of time and one of them not yet published is the Violin Concerto from Sándor Balassa which I recorded with the Hungarian Radio Orchestra. Next May I am going to bring this one on stage with the orchestra of Győr and the conductor Ádám Medveczky. Also, I recorded a Dirk Brossé concerto with the London Philharmonic Orchestra for Philips Records and I made two solo albums in Belgium. A couple of days ago I took part in a Parisian festival named Hungarian Passion with a Brahms sonata evening. I am quite well known and a regular guest in Belgium and in the Netherlands. Luckily they have a high opinion on Hungarians, which makes me really proud. I also like to play in my country if they care to invite me. Last year I was more than happy to perform the Bartók Violin Concerto with the Radio Orchestra and conductor Tamás Vásáry in a nice season opening concert. In October I played the violin concerto of János Viski with the MÁV Orchestra. I also give several concerts in my home town, in Vác. I also go whenever a friend asks me to do a chamber music piece together. It is an honour that the opening event of this year’s Dunakanyar art weeks will be my concert. Together with Marianna Tóth we are going to perform sonatas by Brahms and Ravel.

-What kind of pieces are the closest to your heart?

-I am not choosy, I like to play all kinds of composers. But the truth is that the composers of the XXth century are the most enjoyable ones for me –owing to my temperament. My all-time favourite is Béla Bartók, I know all his violin pieces by heart. I like pieces which move my imagination. Recently I have learnt the very exciting Anthem for solo violin from Pierre Boulez. This serious and abstract composition caught my attention because it is infamously difficult. But if today I were asked to perform it, I would say: Meet me on stage next week!